Miss Ng Soo Hwa, SLA’s Executive Director for the past 20 years, will move on to a new role as Director (Projects) with effect from September 2021. We pay tribute to her dedication to the association and the logistics community over the past three decades.

A walk down memory lane

With little knowledge and background of the logistics sector, Ms Ng Soo Hwa took a leap of faith and joined the Singapore Logistics Association, then known as Singapore Freight Forwarders Association, as the first employee in 1989. Affectionately known as Ms Ng, her mission as a young manager was to set up the management office for the association that only had about 70 members back then.

Weathering stormy periods such as the 1997 Asian Financial Crisis, the 2008 world economic crisis as well as the recent Covid-19 pandemic, Ms Ng unassumingly stood by the association and member companies for the past 32 years, and together with the past and present Council, grew SLA’s membership to over 300 members in 2007. Today, we are proud to represent over 600 logistics members!

How did SLA achieve this over the years? Ms Ng says being relevant across the passage of time was how SLA managed to grow and retain members. She also believes in adding personal touches, and cultivating trust, as well as strong and long-lasting relationships with members that develop into friendships over time. She was heartened by members’ support for SLA, and this was evidenced by their steady support in 2015 when they voted to approve a proposed change in the association’s constitution to allow an increase in membership fees.

Even as a woman, she was unfazed by the rough and tough logistics environment of the 1990s and early 2000s. She saw her role as a woman a refreshing change when interacting with the sector, which helped her to forge stronger member relations. Despite operational challenges to run a non-profit association, she persisted through with limited resources and wholeheartedly supported the Council to grow the SLA team and capabilities to serve the sector.

Ms Ng recalled that the two most noteworthy bold decisions back then that contributed to SLA today was hosting the FIATA World Congress in 1991, which was the first for Asia and Singapore, and a proud moment for the sector as SLA hosted 1200 delegates globally in our little red dot. With sufficient funds, a second bold move was made to purchase an office for SLA in 1992 that the secretariat could anchor and settle down in.

To her, it wasn’t the SLA’s achievements nor her personal achievements that gave her self-satisfaction in her journey with SLA. Instead, helping and improving the lives of people whom she met in the course of her work were her greatest accomplishments. This includes matching people into available job positions that she knew of during bad times, helping lost souls, and even mediating those with difficult relationships.

Her ethos: Unity is Strength

‘We are pilgrims on a journey.

We are brothers on the road.

We are here to help each other

Walk the mile and bear the load.’

“I wish for SLA to continue growing with a solid management office supporting an equally enlightened Council representing the sector. With its more advantageous position now, I hope SLA will continue to build on the good reputation to garner and grow its membership. Unity is strength!

I also think that the sector will be more consolidated, connected, sustainable, seamless and autonomous, with most operations working with the push of a button in 10 years’ time. I look forward to many of the futuristic things that we talk about now, like driverless vehicles being realised,” says Ms Ng.

She also summed up her journey with SLA in one word, and that is ‘Worthwhile’.

‘Worthwhile’ encapsulates everything she aimed to achieve and has experienced in 32 years, which embodies the following: 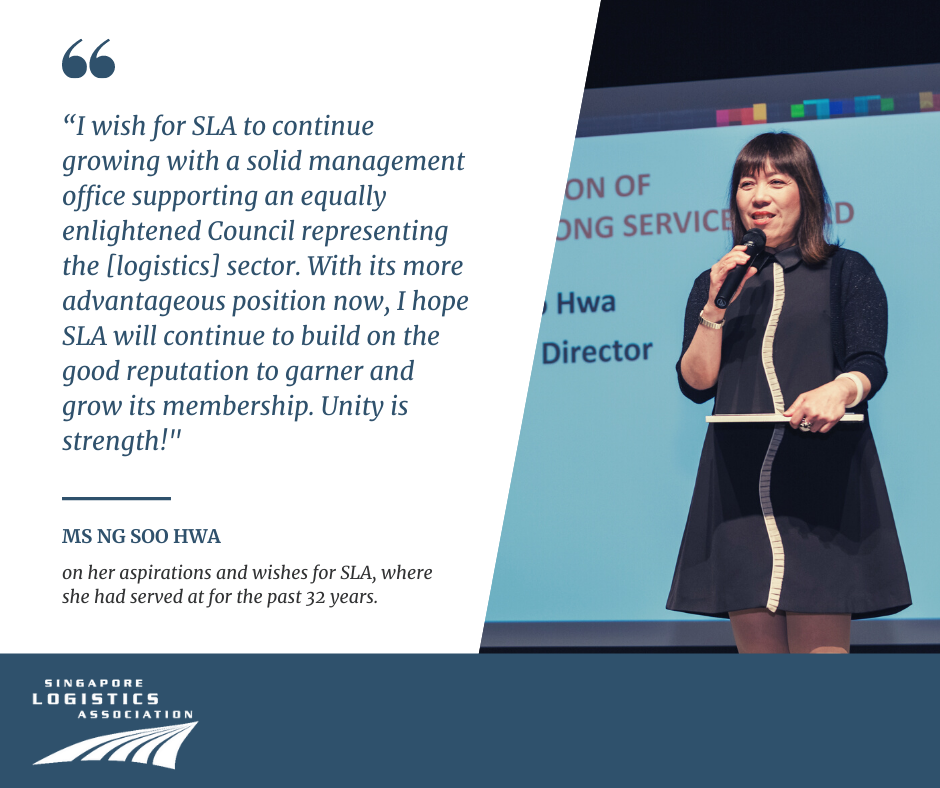 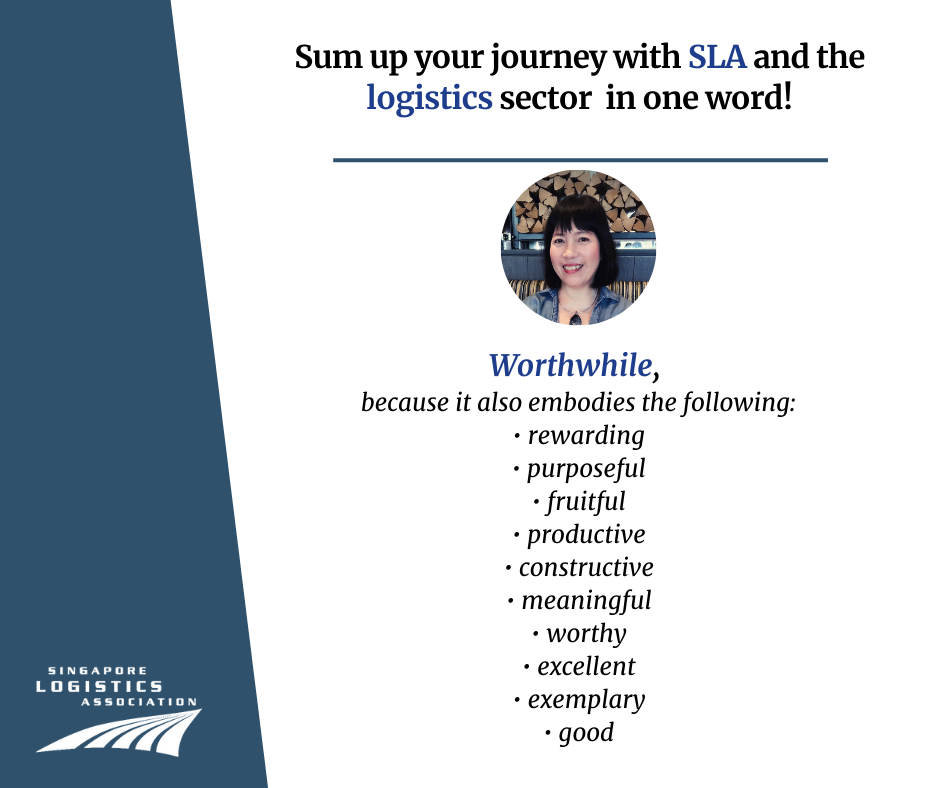 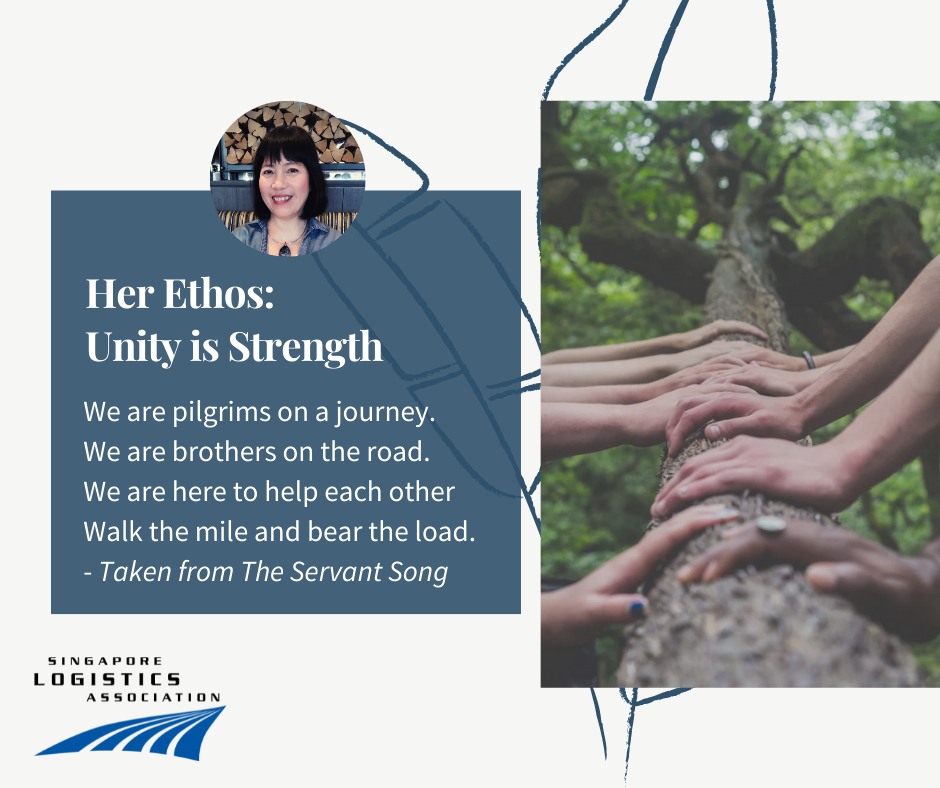