Going the MILE for a SMILE

Inspired by his father who’s a delivery driver for FMCG products, Mr Mohammad Zulqarnain started driving to support the rest of his siblings 12 years ago. Today, he is an urban delivery driver working for DAP Asia Pacific. His day starts at the distribution hub, where he plans and schedules the delivery orders by urgency and priority, and then he sets out to execute them to largely shopping malls and retail outlets throughout the day, be it rain or shine.

A jovial and bright person he is today, Zulqarnain was apparently a completely different person when he first started out in the logistics sector. He was shy, terribly afraid of people, carried out his job without a smile when he meets customers, and did not see the need to have manners when it comes to greeting others.

“I moved from fearing people in the past, to loving to meet people now. Previously, I thought my job was just to deliver, chop, and sign – no feelings involved. I slowly realised this was wrong as I observed how other delivery drivers did not get the same customer treatment and complaints as I did. They gave good services and had rapport with the customers, and that made me reflect that I had to change my way of thinking, to think more about other people’s feelings and provide a better customer experience,” as he recalls his rookie days.

“Today, my secret weapon when I go to a new customer’s location is to let a few other suppliers go ahead of me, while I observe and learn the manner in which the customer prefers the goods to be delivered,” he added.

Besides having good customer service, an urban delivery driver needs efficient time management skills and effective organisational skills to prioritise their trips and be productive. Zulqarnain also shared that he needs to be armed with traffic, navigation know-hows and experiences, that are beyond roads, but also within the malls and properties they operate in.

In a post COVID-19 new normal, Zulqarnain reveals the ‘new way of living’ as urban delivery drivers have to ‘always be prepared’ for changes.

Every day is tremendously dynamic as the pandemic situation constantly shifts, affecting mall operations, the cargo loading and unloading areas, and routes within the malls. For example, entrances might be shifted to a faraway point from the cargo areas, sometimes the lift access changes leaving delivery drivers to use stairs while having to carry the goods too. Zulqarnain also observed customers behaviour shifting as well as they become more cautious, and he notes them so that he’ll know how to manage each customer site better when carrying out the delivery fulfilments.

He feels most satisfied when the customers he serves appreciates his efforts and service. A simple gesture of asking ‘have you makan’ or upon seeing him, or exclaiming ‘I’ve been waiting for you’ as they have been looking forward and expecting him, makes Zulqarnain excited and elated.

But not every day is that rosy with customers. “Some customers only think about their goods, but not the process of how the goods get to them,” Zulqarnain said. There was once a customer told him ‘You’re only a driver, do not ask so many questions,’ which made his heart sink.

When asked how does he cope with such comments or stress from customers, he said, “Stress is a silent killer, and that becomes dangerous when you are on the road”. He believes in having close buddies at work that can help to keep each other focused, even when the day is bad.

On the brighter side of things, Zulqarnain also shared that having friends in the industry helped him in his journey. Sometimes when they see other delivery personnel carrying too many cartons, they would jump in to help one another. He was touched by a recent kind act by a complete stranger – another older delivery driver who ran up to Zulqarnain and helped him push his load side by side up a ramp as it was pouring heavily that day. His generosity and unexpected act of kindness motivated Zulqarnain to also help others through that rainy and challenging day.

Knowing the pains and struggles of learning the ropes to thrive in the industry, Zulqarnain hopes to be able to mentor and help other new drivers overcome the hurdles he went through before. In one word, he described his journey in logistics as ‘satisfying’, and hopes to pass his fulfilling experiences down to others! 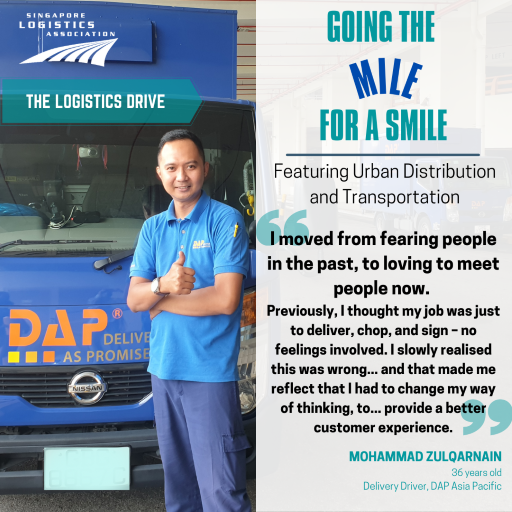 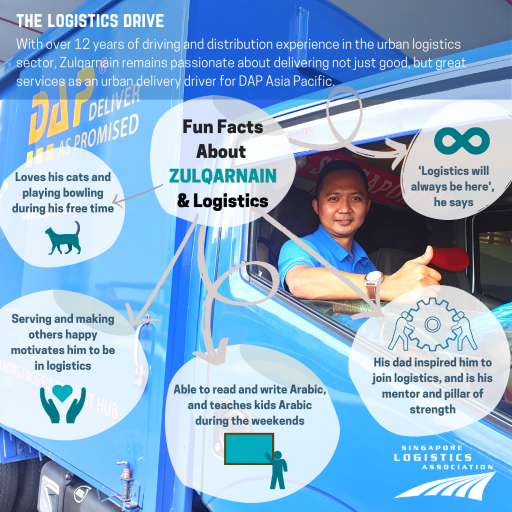